We are approaching 2 years of dealing with the Covid19 pandemic.  The impact on business closures commenced in March 2020 following Government announcements by An Taoiseach, Leo Varadkar.   Insurers, Brokers and Loss Assessors were being contacted in relation to potential claims for business interruption losses resulting from closure or denial of access following infectious disease. It was a steep learning curve for everyone and a stressful time for business owners.

Many policies had infectious disease cover in their wording, to cover such risks, with various inner limits or restrictions. Food and hospitality business policies had the cover to deal with potential outbreaks of E.coli, salmonella etc.  Temporary closure of the business would enable them to deal with the issue, and prevent or limit exposure to potential liability claims.  Gradually a version of the infectious disease wording crept into many small business policies.

Whilst the wording was clear and obvious in many cases, nobody foresaw a widespread business closure due to a pandemic.  Despite there being no exclusion for “pandemics”, Insurers did what many expected them to do – which was to decline policy liability.

For those of us who represent policyholders, this was a very disappointing move.  It was made all the more disappointing when the insurers continued to resist all reasonable arguments and logic, as they sought to defend the indefensible.

Balcombes are expert in policy wording and interpretation.  It is one of the tools of our trade.  Policies are a contract between the Insurer and the Insured party and are legal documents.  Regularly we have to interpret the “small print” to base our argument for certain aspects of a loss to be considered.  Ultimately, if the wording is in dispute, the contract allows for review by an independent adjudicator.  This is usually by way of Arbitration, Litigation or a complaint to the Financial Services and Pensions Ombudsman.

AXA were the first Insurer to admit they had no reasonable or reliable defense.  In June 2020 they agreed to deal with Business Interruption claims under their Shops Office and Surgery Policy.  Their policy provided for losses up to a maximum period of 3 months from the occurrence of a notifiable infectious disease at the premises or within a 40km radius of it.

All other insurers continued to actively decline claims.  The FCA in the UK took a test case to the High Court to test the legality of the wording of the majority of all available wordings on the market used by the main insurers.  The result of that action was delivered in February 2021 and resulted in most other claims, within the limitations of their particular wording and inner limits, being met during the remainder of 2021.

FBD was the subject of a separate high profile legal action taken by 4 publicans in the High Court in Ireland.  It also found in favour of the policyholders of their Public House policy.  It covers “imposed closure” as a result of infectious disease on the premises or within 25 miles of same.  However, FBD continued to dispute the legal costs of the 4 plaintiffs, and more critically, they wanted the judge to rule that the indemnity period ceased when the “closure order” was lifted, despite the fact that most pubs that were allowed to re-open (food pubs) were only allowed to do so under severe restrictions and then were re-ordered to close in subsequent lockdowns.  FBD like all other insurers deleted the cover for infectious disease in July 2020 and subsequent renewals.  Any policyholder with a renewal date in the second half of the year would not have any cover for second or subsequent lockdowns.  There was a further hearing in the High Court in October 2021 with additional arguments from both sides.  The Judgment was supposed to issue in December 2021, and was delayed.  The final Judgment is expected in Jan 2022.

In the meantime, FBD, Hiscox and others have commenced issuing compensation payments to policyholders for the mis-handling of their response to the claims process.  It is believed this is because of the extensive review carried out by the Central Bank into the handling of the matter by Insurers.  Many cases were also taken by individual policyholders to the FSPO and in several cases there was compensation awards handed down for the failure to handle the claims process promptly and fairly.  It is thought that the Central Bank may well hand down fines to Insurers for their failures in handling of the Covid19 issue.  Some insurers may be trying to mitigate any imposed fine by voluntarily paying compensation to affected policyholders. 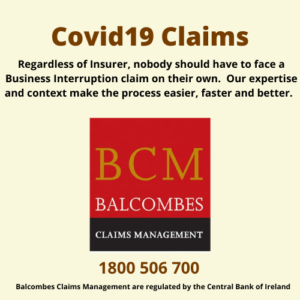 Despite the fact that the Covid19 BI claims debacle is nearly at an end, there is still some way to go.  There have been discrepancies between insurers on whether each Covid19 closure was one event or multiple events.  Some insurers allowed each lockdown to be treated as a separate claim, but only up to the subsequent renewal date.  Others allowed the full 12 month indemnity period and took sales/profits generated between lockdowns into consideration.  It is hoped the Judgment in the FBD case may provide some final clarity on the correct indemnity period applicable.

Use a Balcombes loss assessor to best effect

We hope that lessons have been learned by the industry. One thing is clear; Policyholders are not equipped to deal with a claim on their own.  The relationship is very one-sided and unequal as insurers engage loss adjusters to handle claims on their behalf.  As Insurance policies already pay for professional fees necessarily incurred in reinstatement, it would make perfect sense that they should also include claims preparation costs for all property and business interruption claims.  We believe this would be viewed very favourably by consumers, industry bodies and regulators.  Policyholders should be entitled to have equal representation, paid for by the policy, to ensure that fair procedure and equal expertise is afforded to the policyholder.